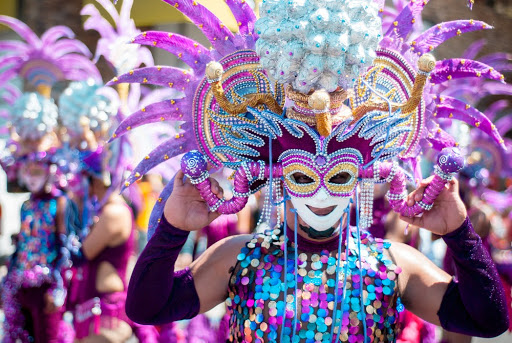 Every year, visitors and locals alike crowd the streets of New Orleans wearing feather-coated masks, neon-beaded necklaces, and larger than life costumes to celebrate the last day of Mardi Gras, Carnival. However, you may not know that New Orleans’ nearby neighbor, Dauphin Island, makes Mardi Gras the biggest party of the year! Dauphin Island, Alabama, celebrates a month-long Mardi Gras Festival. Lucky for you, Dauphin Island Beach Rentals is in the heart of the action.

Mardi Gras events date back to the 17th and 18th centuries. They are said to have started in Italy then migrated to the French House of the Bourbons. In early March, Jean Baptiste Le Moyne Sieur de Biensville, French Explorer, arrived south of New Orleans and decided to call the region “Pointe du Mardi Gras” after his men announced the holiday is tomorrow. Biensville named another area “Fort Louis de la Louisiane” which is known today as Mobile. In 1703, they celebrated Mardi Gras for the first time in America.

The Dauphin Island Mardi Gras Parade is truly a family affair. Children love running up and down the streets following their favorite floats. Some parade floats toss candy to the people lining the road, while other floats have large speakers onboard playing popular tunes.

Salty Paws is one of the newer Mardi Gras events in town, and it’s also a fundraiser for the Animal Rescue Found

ation. The highlight of this charitable event is the Mardi Gras Parade run by pets dressed in festive attire. Prizes will be awarded to the most creative costume, best group costume, and several more. If you meet an animal that steals your heart, you can request to call them your fur-ever friend.

While all Mardi Gras events in Dauphin Island are one of a kind, each celebration recognizes history, religion, and community. To learn more about things to do at Mardi Gras near your Dauphin Island Beach Rental, give us a call today at 800-771-1480.